Sunday afternoon, on 1 of my favorite walks, down Myrtle Avenue, on the way to Bushwick, I passed Taffe! My peers Brokn Englsh, Deal the Villain, Janelle Bechdol, and 8thw1 had, on different occasions, recommended I try an Ostrich or Elk Burger from Sputnik.  Sputnik is largely a performance space (in the Basement) which will be featuring prominent Hip Hop Artists Talib Kweli and Primo, with my peoples Red Clay opening on September 5th. It's located on Taffe Place between Willoughby and Dekalb Ave.
Upstairs they serve some comfort foods and drinks as well as soft beverages. The vibe was chill with books by the window and flatscreens by the bar, quite the dichotomy.  On Sundays they play movies in the evenings. I was fortunate enough to catch Akira Kurosawa's YOJIMBO. 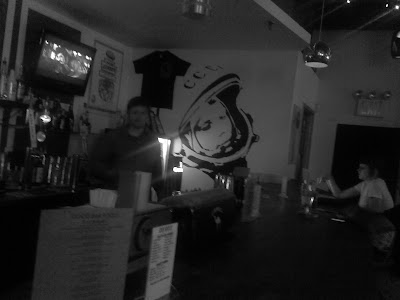 What was unfortunate though, Elk and Ostrich were discontinued on the menu. What was left? The average burger fare, Turkey, Beef, Veggie and Bison. They discontinued Elk and Ostrich meat 3 weeks ago. That's what I get for procrastinating. I just had a coke... Review over. 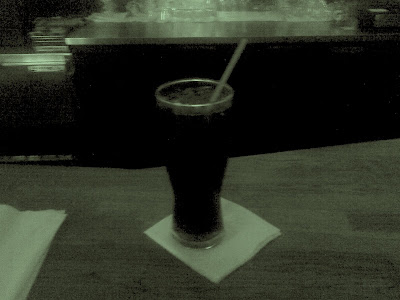 Okay, not really. I asked the friendly bartender, Ryan, what the drill was? He said the Guacamole' Burger was a top seller. He also told me that all the meat was organic and that they had switched to an 8 oz. patty over the 5 oz. So Bison it was. Just to be risky and for full gusto, medium. Ryan asked if I wanted fries or onion rings. He recommended onion rings, so that's what I got. 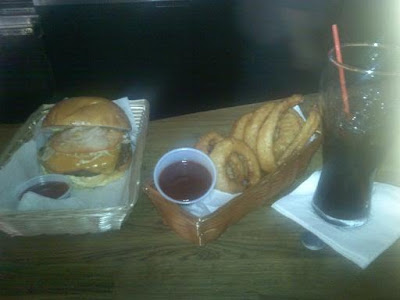 Check out the burger. It was pretty heavy duty. No knots in the meat like a Public School or McDonald's Angus burger. It wasn't greasy. The center was pink but not bloody.  The meat wasn't flavored so much and it just provided mass rather than gusto.  The red onions on top actually lent the most flavor to the whole experience. So what's the problemo? Where's the GUACAMOLE'??? 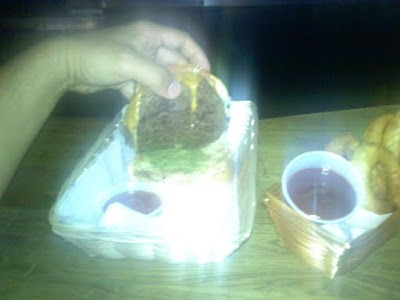 There it is!
It didn't add to the burger really. It was just squashed avocados. The Guacamole' provided no extra kick. I was a fan of the onion rings. I was happy but confused as to why they gave me BBQ sauce with the onion rings because it actually went on my burger. The onion rings were fluffy and the onions in the middle were soft and flavorful. The dough on the onion rings wasn't that greasy.  The batter wasn't a filler but a contributor to the taste.
I wish I had ordered the Spicy Burgers which had jalapenos instead.
Overall I was pleased with the ambience and vibe of the place which made eating there worth the price. All of my food Bison Burger, Coke, and Onion Rings came out to $16. Of course I gave Ryan the last $4. Always tip!
(Even a crappy tip to reflect crappy service which was definitely not the case at Sputnik).
here's the Rating.
@@@
that's 3/5 Where it's AT!'s @'s
get it?
If you happen to be dining alone or plan to...
Bring your Ipod along and enjoy some of my boy's, Jinesis, production album
THE COFFEE SHOP 2.
http://www.zshare.net/download/6267678191491a37/
press to Download!
here's a lil video off his album
Posted by Unknown at 5:28 PM No comments: